The latest update to Google Search adds a new option to its voice control arsenal. You can now tell Google to take a picture or record a video. While the recording and photo taking won’t start instantly.

You will be quickly sent to the camera app, which will automatically open on the correct recording method. So quickly, in fact, that it’s taken me a couple of tries just to take the screenshots that you see above. 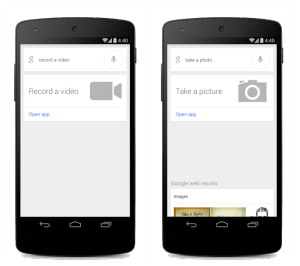 If you are using the Google Now Launcher, which is set as default on the newer Nexus 5, you can quickly enter the camera using voice control alone. It’s highly likely that with the update, you will be able to control many of your smartphone’s function by using your voice and nothing else.

Even if you’re not using Google’s own launcher, you can still use the function but you’ll have to actually enter the app in order to give it voice commands. However, this way of accessing the app is a lot slower, granted, so it won’t be replacing your camera shortcut anytime soon.

However, while the improvements are relatively small, this proves the progress that both Google Now and Google Search are making. Google is constantly improving its mobile search offerings, and avid users have likely noticed that with even more updates, it gains features and even more accuracy in voice recognition.

How to Archive WhatsApp Chats on Android and Keep Them Hidden
1 June, 2021 —

How to Detect and Remove Spyware From Android
1 June, 2021 —

Just like PCs and other computing devices, Android devices are also prone to viruses and malware. Unsafe internet exploration and installation of unknown apps are the most common ways to get malware on your devices. One of the most common types of malware affecting Android de…