Exploding Kittens is an amazing card game that recently made the transition to the digital world. It was available for download in January on iOS and has now been released for Android.

The general rule of thumb is to try and survive as long as you possibly can and if you happen to be the last person standing then you win. You’ll need to out-think and out-move your opponents to prevent yourself from ending up with the ‘Exploding Kitten’ card. If you get this then you’re out of the game! 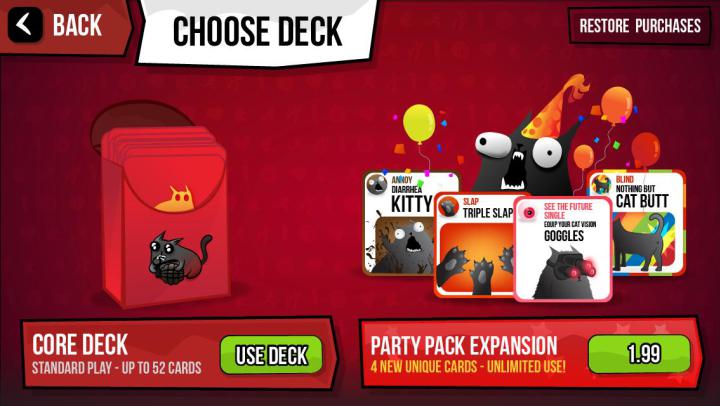 The designs on the cards are stunning, fun and quirky and as you make your way through the game you’ll find yourself using defense cards as well as hoping for a little bit of luck to try and outlast your enemy. The game doesn’t feature a single player mode due to the nature of the game, however, you can play it online against players all over the world or you can play it locally either through Bluetooth or WiFi (you’ll play against every device within the same WiFi network).

You can download it below for a very fair $1.99 and is well worth the money. There are also in-app purchases too however these aren’t needed to enjoy the game. For some great fun and exploding kittens, look no further than, well, Exploding Kittens.
Action Games, Android games, Cards Games

James Brandon29 April, 2020
The end of April 2020 is here! A lot has happened in the tech world as developers have been working …
END_OF_DOCUMENT_TOKEN_TO_BE_REPLACED

COVID-19: Here are 5 Super Addictive Android Games to Fight Boredom during the Pandemic

James Brandon3 April, 2020
The year 2020 began normally for many countries but when the Coronavirus disease began to spread globally, a lot of …
END_OF_DOCUMENT_TOKEN_TO_BE_REPLACED

James Brandon27 February, 2020
It is that time of the month for game lovers!! When they get to know about the new games released …
END_OF_DOCUMENT_TOKEN_TO_BE_REPLACED

James Brandon30 January, 2020
Being a new year, we expect more from Android, especially from game developers. They did not disappoint in 2019 and …
END_OF_DOCUMENT_TOKEN_TO_BE_REPLACED

James Brandon25 December, 2019
With only a few days left in December, the year is almost over. Game lovers from all over the world …
END_OF_DOCUMENT_TOKEN_TO_BE_REPLACED